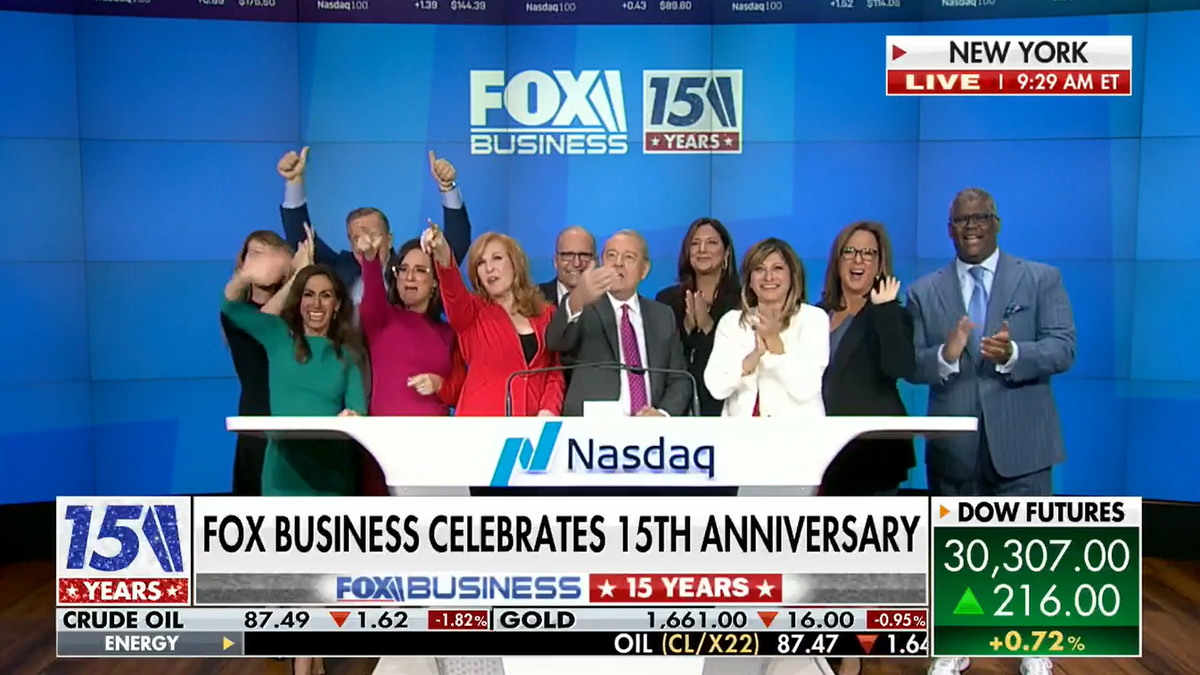 Varney appeared to do his version of the royal wave, while others clapped and waved as trading opened.

NEIL CAVUTO LOOKS BACK AT 15 YEARS OF FOX BUSINESS NETWORK: ‘WE TAKE STOCK OF THE COUNTRY’

The bell-ringing ceremony is designed to celebrate a company’s “achievements and milestones before a global audience,” according to Nasdaq.

Bartiromo appeared on FBN live from Nasdaq MarketSite before the ceremony to help kick off the celebration.

“It’s not about the economy, it’s about your economy. It’s not about the stock market, it’s about your stock market. It’s every aspect of our viewers’ lives. That is the broader mandate that we have, and we love it,” she continued. “We’re so excited being here and to celebrate 15 year has been just an incredible day, and we’re all so proud of it.”

Fox Business Network launched on October 15, 2007, as the U.S. was on the precipice of an economic crisis. The network forever changed the way business news is covered with an approach that appeals to Main Street in addition to Wall Street. FBN ended the third quarter of 2022 with a larger Business Day audience than CNBC for the second straight quarter.

“More individual investors than ever before are playing in this market. Some don’t even know it, but through pension funds and their own funds, they are players. Key players. Important players. We owe them a no-nonsense, no-jargon view of this world. It’s their world. Their future. I think one of the things of which I’m most proud, ‘we’ are most proud, is how FBN democratized business news, and not just through the prism of our financial capital but our nation’s capital,” original host Neil Cavuto told Fox News Digital.

“We recognized early and often that even if you don’t own stock, you own stock in this country. You pay taxes. You pay into programs that you hope and trust will be there for you. We got that. We get that. We police that. We continue to pound that,” Cavuto continued. “I often tell people we’re not red or blue, we’re green. Just green. Just money. Who is spending it, and who is wasting it? We don’t just cover stocks in this country. We take stock of the country. For too long, business channels failed that test to cover the entire big picture. I like to think we changed that.”

Earlier this month, Fox Business announced the return of its popular programming lineup, FBN Prime, that will continue to celebrate success stories across key American industries.

Brian Flood is a media reporter for Fox News Digital. Story tips can be sent to [email protected] and on Twitter: @briansflood.

[ad_1] As education increasingly becomes a focus in the midterm